Posts from the ‘Wildlife’ Category

A Few Minutes in the Life of a Coyote

In the wild, coyotes hunt small mammals like mice, voles, and ground squirrels. It's great fun to watch coyotes at work in the winter months, when they use their keen sense of hearing to detect prey under the snow. Yesterday I had the chance to photograph a coyote as it trotted along a nearby trail in the Upper Geyser Basin.

END_OF_DOCUMENT_TOKEN_TO_BE_REPLACED

Wolves in the Neighborhood

There has been quite a bit of excitement here at Old Faithful since yesterday afternoon, when a lucky group of park visitors saw a group of wolves kill an elk in the Firehole River not far north of Biscuit Basin.  I was on duty at the visitor center both yesterday and today, and so have not been out to view the kill myself yet.  I got to see some dramatic photos taken by snowcoach and snowmobile guides, though, and all I can say is WOW. END_OF_DOCUMENT_TOKEN_TO_BE_REPLACED

The Garnet Hill loop can be hot and dusty in the summer months, when most visitors come to Yellowstone. But if you’re visiting the park in the spring or fall, the Garnet Hill Loop becomes a real winner. When I hiked the Garnet Hill Trail on Saturday, I was fortunate to enjoy a great day of wildlife watching, observing animal tracks, and appreciating the natural quiet of Yellowstone in late autumn.

END_OF_DOCUMENT_TOKEN_TO_BE_REPLACED

My Week in Haiku

END_OF_DOCUMENT_TOKEN_TO_BE_REPLACED

Less than one month ago, I posted a story about white-nose syndrome killing bats in Mammoth Cave National Park. Today, more bad news came from another national park site, Cumberland Gap National Historical Park, where white-nose has just been documented for the first time.

I contacted Katie Gillies, the imperiled species coordinator at Bat Conservation International, to ask what can be done to combat the spread of white-nose.

"There is an extensive amount of research being conducted on several fronts right now," she told me. "A few years ago, the fungus didn’t even have a name, and today the full genome has been mapped, sensitive molecular tools to detect it have been developed, and we understand the histology of the fungal invasion and believe we understand the proximate and ultimate causes of death."

END_OF_DOCUMENT_TOKEN_TO_BE_REPLACED

The wolverine is one of the most astonishing and most misunderstood creatures on earth.  Its scientific name of Gulo gulo, or “glutton glutton,” is hardly complimentary, and offers insight into what wolverine biologist Kerry Murphy described as “a serious PR problem” back in late June 2008.

Murphy was teaching a Yellowstone Association Institute field course, Yellowstone’s Pack of Predator Concerns.  Though it’s been almost five years since I attended the four-day class, I still remember the key points Murphy hammered home: wolverines are rare, they’re in trouble, and they get remarkably little sympathy.

Built like low-slung bears with long tails, wolverines are at home in snowy environments. USFS photo.

END_OF_DOCUMENT_TOKEN_TO_BE_REPLACED

In keeping with my pledge to spend more time in nature this year, I made my first visit to the Outdoor Campus – West in Rapid City this past weekend.  Run by South Dakota Game, Fish and Parks, the Outdoor Campus — West opened in 2011.  The facility features a LEED Gold building (one of only eight structures in South Dakota that have attained this level of certification from the U.S. Green Building Council) situated on 32 acres that include two small ponds, a stream, and 1.5 miles of trails. 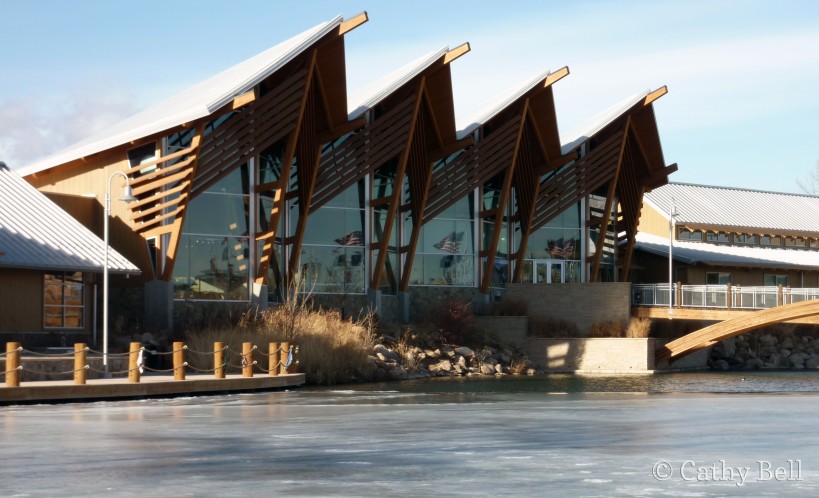 The windows lining the front of the Outdoor Campus – West building look out over a pond that’s home to ducks and muskrats.  View a map.

END_OF_DOCUMENT_TOKEN_TO_BE_REPLACED

Sad news today from Kentucky’s Mammoth Cave National Park, where Superintendent Sarah Craighead confirmed the death of a northern long-eared bat from white-nose syndrome, a deadly infection that affects bats that hibernate in colonies.  It is named for the frosty white fungal growths that appear on the muzzles of sick bats.

END_OF_DOCUMENT_TOKEN_TO_BE_REPLACED

The Hawk in the Hedgerow

We crept slowly forward, peering into the hedge where it thinned, looking to the lawn on the far side. We saw nothing. We closed to within five feet of where the hawk had flown into the hedge. Still nothing. Until, with the same swift grace with which it had flown in, the hawk emerged from the hedge. As the bird sprung aloft, so close in front of us that we felt its wingbeats as much as we saw them, it faced us for the briefest of moments as it elegantly arced back over the hedge and up into the spreading branches of a massive pin oak in the churchyard.

The flash of the hawk’s underside showed that the white feathers of its breast and belly were marked with fine, red barring. We had a bit longer to take in the dorsal view, with the bird’s slate-gray back and banded tail. As the hawk flared its wings and tail to brake into a landing, we could see that the tip of the tail had a deep, C-shaped curve, edged in white. It was a Cooper’s hawk.