From Prairies to Cornfields

I didn’t give much thought to America’s prairies until I moved to South Dakota.  I grew up loving the hardwood forests of the Mid-Atlantic and New England states, then discovered the great western mountains as a college student.  The grasslands of North America were something I skipped over, believing them flat, unvarying, and dull.  What little I knew of prairie came mainly from childhood.  Fourth-grade geography lessons, Little House on the Prairie, and the favorite Apple IIe game of eighties educators, Oregon Trail—these were the sources of the vague impressions I had about an ecosystem that historically occupied more than 1.4 million square miles of North America.

A black-tailed prairie dog peeks out of its burrow at Lacreek National Wildlife Refuge, South Dakota.

When I first came to work at Badlands National Park in 2008, the prairie took me by surprise.  Far from being a pancake-flat plain with a boring lack of biodiversity, the grassland teems with life.  Much of it is subtle or hidden from sight.  Mammals including deer mice, prairie dogs, black-footed ferrets, and swift foxes seek shelter in underground burrows.  Reptiles like the prairie rattlesnake spend much of their time tucked safely out of the elements in crevices.  Amphibians like the plains spadefoot toad breed in shallow vernal pools, but can dig down two feet to moist soils when the surface dries.  Even a bird, the charismatic little burrowing owl, goes underground for shelter.

The climate here on the northern plains is harsh.  Temperatures commonly exceed 100°F in the summer; this year, the maximum for the season was 109°F, one day in late August.  It gets cold in the winter, though.  I remember a low of -22°F in January 2010.   Dry air and near-constant winds desiccate plants, drawing water out through undefended stomata.  With a scanty 16-18 inches of rain in an average year, Badlands isn’t quite a desert, but it definitely doesn’t get enough moisture to support trees.  Grasses dominate the prairie vegetation.

The arid western plains, in the rain shadow of the Rocky Mountains, were the land of shortgrass prairie.  To the east, with increased annual rainfall, the grasses grew to greater heights.  The old tallgrass prairies had species like big bluestem that attained heights of ten feet.  The South Dakota badlands lie in the mixed-grass prairie transition zone.  Altogether, the prairies spanned a thousand miles, east to west.

It takes experience and patient observation before you begin to differentiate one kind of grass from another, and longer before you come to marvel at the adaptations that allow those grasses to survive.  They thrive in tough conditions by focusing 70-80% of their biomass underground, in their root systems.  A prairie grass like blue grama, for instance, grows to perhaps eight or twelve inches, yet some of its roots can reach downward for six feet.  Most of blue grama’s roots, though, lie close to the surface in a dense, fibrous network that holds the soil together and resists erosion.

The vast native prairies of North America must have been a sight to behold.  Unfortunately, prairie vegetation today occupies less than 2% of its former range.  On the fertile lands that were once covered in tallgrass, the situation is even worse.  Less than one-tenth of 1% of the tallgrass prairie remains, according to the U.S. Fish & Wildlife Service.  Nowhere is this more obvious than in the state of Iowa, where cornfields have come to dominate the landscape.

NPR’s science blog, Krulwich Wonders, has a harrowing story up at the moment called Cornstalks Everywhere But Nothing Else, Not Even a Bee.  Blogger Robert Krulwich describes Craig Childs, author of The Secret Knowledge of Water and the new Apocalyptic Planet, as he discovers an herbicided and insecticided Iowa cornfield that is almost devoid of non-corn life:

He found almost nothing. “I listened and heard nothing, no bird, no click of insect.”

There were no bees. The air, the ground, seemed vacant. He found one ant “so small you couldn’t pin it to a specimen board.” A little later, crawling to a different row, he found one mushroom, “the size of an apple seed.” … Then, later, a cobweb spider eating a crane fly (only one). A single red mite “the size of a dust mote hurrying across the barren earth,” some grasshoppers, and that’s it. Though he crawled and crawled, he found nothing else.

“It felt like another planet entirely,” he said, a world denuded.

Southwestern South Dakota, where I live, is not corn country, and I am glad of it.  There isn’t enough rain here to support the intensive corn production seen in Iowa, and that means we have been spared becoming the complete ecological desert that is a cornfield.

North America’s prairie is arguably our most endangered ecosystem.  Prairie dogs occupy only about 5% of their former range.  The black-footed ferret, dependent on prairie dogs for 90% of its diet, was thought to be extinct in the 1970s and is today making a comeback only thanks to a last-gasp captive breeding effort.  An estimated 60 million bison roamed the plains two hundred years ago.  Almost half of grassland bird species are in trouble.  The grasses themselves are being pushed out by non-native invaders like cheatgrass and sweetclover, even on protected lands.

With that in mind, public lands managed for conservation—places like my current home, Badlands National Park, as well as Tallgrass Prairie National Preserve and Canada’s Prairie National Wildlife Area, to name a few—assume an ever-greater importance.  They are our defense against and our refuge from a future devoid of diversity.  They are also places of great beauty. 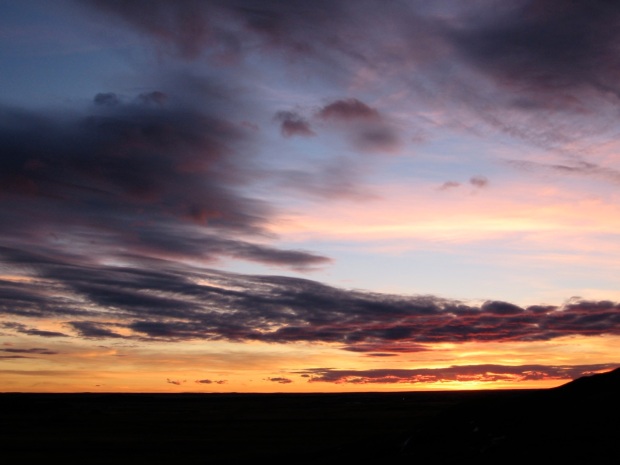